Rukometstat is a complete solution for monitoring and archiving statistics of a single handball match, but also a complete competition. It’s currently being used in Croatian handball leagues, SEHA (regional Central European handball league), and Hungarian team “HC Csurgoi”. System has, after it was introduced (for Croatian leagues) in 2009. vastly simplified following of competitions to all : news writers (journalists), coaches, players and last but not least – average handball fans.

System has been positively reviewed by (former) daily sports magazine “Sport plus”, and “Sportske novosti”, leading Croatian sports newspaper, who called it “among the best in Europe”.

Facilitates keeping track of statistics during a game, creates different match reports
– statistics are entered through a simple Windows application interface, after which the application is able to print out match reports very easily.
Live scores
– entered and updated by operators on the match place, scores are visible straight away through a web page that displays, apart from the current score and the current match minute, detailed player statistics, score development and much more
Cumulative statistics
– System automatically updates and generates complete cumulative statistics, making full statistics such as top scorer, most assists, and other statistical categories easily visible 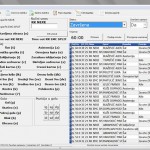 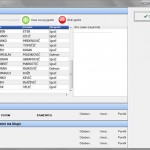 Selected game statistics is kept track off by an operator, possibly assisted by another person, who helps keep track of specific in game events, and those details are entered in a Windows application. Application is extremely simple and intuitive which allows all those actions to be completed swiftly and with ease.

The final output is three different match reports which can be printed out for every single game, made of basic statistics, detailed statistics and list of match events (play by play). Basic statistics is a one page document containing player statistics and score development. Detailed statistics is a four (two pages for each team) page document and apart from having individual player statistics, it also contains detailed graphical report about both team and individual shot placement (where each team has taken shots from, which part of goal has a player shot at most times, etc.) 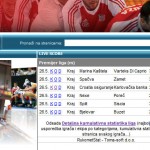 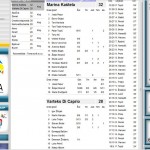 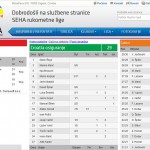 As soon as a handball match is finished, cumulative player and team statistic is being populated. This means that at any point in a season, user can view season-to-date individual statistics, but also top season goal scorers, players with highest scoring percentage (position based, shot location based), player with most assists, turnovers, steals, players who got suspended most times and who earned most suspensions/fouls on them. 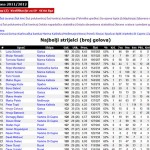 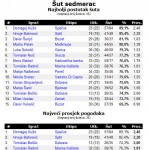 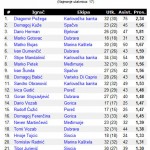 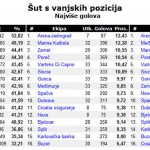 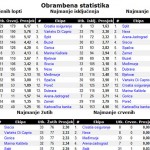 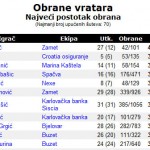 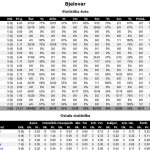 Why is Rukometstat an excellent choice?

There’s a number of reasons how Rukometstat can improve a competition or a team:

range of information
– before our system was introduced in Croatian handball leagues, finding out scores of those games even after they had finished was almost rocket-science. Our system enabled all media and handball fans to follow those competitions at a much higher level – match results, but a lot more with it too, is now on user’s palm of the hand
in-game analysis, after game reports
– with our system, coaches and players have an excellent opportunity to analyze their (or their opponent’s) individual or team performance, either after the game or even during the halftime break. It can help them analyze how each defensive formation performed and results it has provided, positives and negatives from each individual, key match moments, responsible individuals, key positions that team has been scoring or conceding goals from, etc.
Tactical pre-game preparation
– match archive and cumulative statistics allows for perfect tactical preparation for both coaches and players. For instance, it’s possible to analyze which player prefers to aim at which parts of a goal, which goalkeeper has a higher percentage of stopping/conceding goals from each field position, finding the biggest strong/weak points for each opponent etc.
Player scouting
– Beforehand, due to defective coverage, it was almost impossible for scouts to get the right idea about players from Croatian leagues. This has all changed since our system was introduced, giving a detailed insight about each player thru their own player pages, which include stats from each season but also detailed match statistics from current season
Facilitated administration
– our application has the possibility of creating a match report in e-form, which can be forwarded with minimum adjustments and modifications to the league/competition organizers, reducing the additional workload to the bare minimum

Few references of our Rukometstat service:

HRS – Croatian handball federation has been using our application in leagues under their supervision since 2009., with mandatory stats following in both men Premijer liga and 1. ladies league

SEHA League – regional Central European handball league was established in 2011. and has been relying on our system basically since it's start date

HC Csurgoi – One of leading Hungarian handball teams has been using our system since 2012.